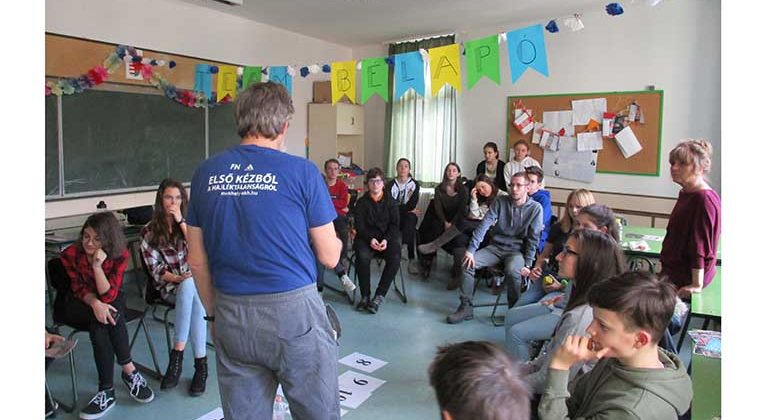 „No-one should sleep on the street – complex sensitizing campaigns on homelessness in V4 countries” project funded by Visegrad Fund.

The lecture on the school day was attended by 23 students and two teachers. The performance featured Gyula Balogh as a moderator, Csilla Horváth as a speaker, and Ádám M. as a photographer. In addition to them, a student of the „Getting to Know LGBT People” school program was present. In the first third of the presentation, the moderator asked the students about their experiences with homelessness, provided information and answered general questions. In the second part, Csilla and Gyula told their life stories in 15 minutes and answered personal questions. In the end, 12 students were involved in a situation game who were given the role of a homeless person to experience the difficulties of homelessness. they were split into two teams to have a little competition during the game. Members of both teams struggled in the position of a person who had just become homeless to get a place in a homeless shelter. Each participants were given a copy of „Fedél Nélkül” streetpaper.

The students already had experiences with homelessness and had a lot of questions. The participants were very empathetic and open-minded and took part in the game boldly and creatively.